Aerial Installation for the loft or outside.

There are many people who haven’t the foggiest idea of what kind of aerial is going to be best for the home. All that they want is to be able to watch uninterrupted television without the curse of the 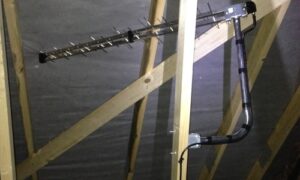 poor signal. Problems with poor signal can present itself as the television picture freezing, or the picture breaking up in to blocks followed by a loud screech. If you have ever had the misfortune of experiencing these problems, you will know exactly how annoying this problem is. If the problem of picture glitch has been occurring since having the digital aerial installed, then it points to one reason why this is happening. Assuming that the aerial has not been damaged, then it is likely that the antenna has been situated in the wrong position.
At TV Aerials Stoke we have notice that with the increase of new build properties popping up all over the place, there is a rise in the number of loft aerials being fitted. It is often due to the rule that in some new build sites it is encouraged to have an aerial installation in the loft, for the purposes of aesthetics rather than what is going to be best for the reception and function of the aerial. Is this the wrong thing to do? Well, it really does depend on the signal strength & quality being received within the loft space and also on the skill of the aerial fitter carrying out the aerial installation work.

Benefits of a TV Aerial Installation in a Loft

There are a few reasons why if it is possible, to have the TV aerial installed within the loft. As opposed to having an external antenna, the benefits of having a loft aerial are that it out of the way of the ravages of the UK weather. Wind and rain can take its toll on anything externally fitted, particularly if it requires a degree of electrical current. It also can expire that if a cheap quality aerial has been fitted externally, that the cheaper aerial will get water ingress and suffer a terminal failure shortly after this happens. Only quality aerials should be used for external use.
The loft aerial can get away with being of a cheaper make due to the fact that it will never be effected by bad weather and because of this will last for decades without failing. As long as it has been fitted correctly and is picking up a strong enough signal it will carry on working for a very long time.

As opposed to the antenna installed in the loft, the externally fitted aerial should be of a good make that has the quality of manufacture for it to be able to withstand the worst of the weather, year in and year out. There are plenty to choose from and a good quality, aerial even when externally fitted to a chimney, should keep operating for well over a decade. It is usually only old or cheaply made aerials that need to be replaced over time. The benefit of having an aerial installation on the chimney is that unlike in the loft, where you can lose up to 50% of the signal due to interference, the externally fitted antenna is able to pick up the strongest possible signal available in that particular location. This can work out cheaper in some cases, as it may mean that an amplified booster is not required, whereas it may often be needed to be used on a loft aerial.

Due to the possible interference of the actual roof, a TV aerial installed within a loft can pick up 50% less of the signal that is actually being transmitted. This all depends on where the property is in relation to the TV transmitter, and also, whether there are other factors that are causing the reduced signal reception, such as trees. So if a loft aerial is what is wanted, & yet the signal is somewhat poor, the solution to the poor signal is to boost it using an amplifier design specifically for this purpose. It is important to measure both the signal strength and quality before installing the amp since, if the signal quality is very poor, there isn’t much chance that putting a booster on there will actually help. In most cases it will increase the signal strength but not the quality and the end 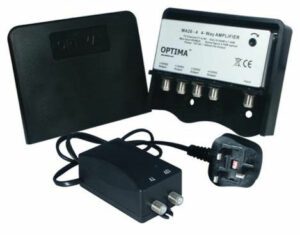 result is still picture glitch on the television. If however, the signal is poor but the quality is yet good, then it is ideal for an amp to be fitted to boost the signal. If there is a spare power socket in the loft, then a setback amp is the kind to go for. If there is no power supply to use, then a mast head amplifier should be used.

As previously mentioned the setback amp is used when there is a power socket handy. The aerial coax will plug into the input of the amp, then the output feeds are taken for the number of aerial points in the home. If there is no power supply in the loft, or it is for an externally fitted aerial, then the amp to use is the mast head amplifier.
This is where the amplifier is design in two separate parts instead of one. The amplifier and splitter unit it fitted into a water proof box and is usually secured near the aerial itself, usually attaching to the base of the mast. All the aerial feeds for the TV points in the house are connected to this splitter device. The second part of the mast head amp is the separate power unit. This is usually plugged in to the power in most cases sitting behind one of the TV’s in the home. To get the power up to the amplifier on the base of the aerial mast, the power unit sends its charge up the coax cable directly into the amp. This charges the amp and it now boosts the signals being sent down each of the coax cables connected to the unit. This is a very reliable way of amplifying and externally mounted aerial or any aerial that is situated in a place with no power.

Which aerial installation is best really depends on the signal that can be received once the aerial is erected. One thing to keep in mind is to use professionally trained aerial fitters, preferable ones that are accredited by some trade body such as the Rdi or the CAI.