When it comes to repairing a faulty aerial most people will have left it way too late for any significant work to be effective. For instance, a homeowner will suddenly notice water dripping out of the end of the coax cable. At that point, they think about repairing the aerial system, only to find out that the whole system has been ruined by getting water in both the aerial head and also in the cable. They will have noticed that the previous to water dripping out of the coax plug, the picture started to break up from time to time & that on occasion they would lose the BBC channels altogether. However, it would then right itself and they would forget that there had been a problem until it happens again. It is at that point that should be looking at getting in a professional to check over the aerial system and find out what is behind the signal problem. In most cases in our opinion it is usually too late to carry out any kind of repair, simply because people leave it until there is either water coming out of the aerial cable or they have lost the signal altogether.

How to repair a TV amplifier

The sub title is sort of a trick since usually there is no cost effective way to repair a signal booster. They are usually sealed units and unless you are pretty skilled at repairing small electrical circuits 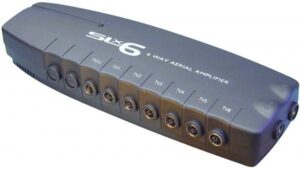 then repairing one would be a no no. However, it is worth understanding how to tell if the amp has failed or if it is something else. Quite often over the years in which I have worked for TV Aerials Stoke I would go to call outs where the customer has replaced an amplifier thinking that this was the problem. Unfortunately, after replacing the aerial amplifier with a new one, the problem hadn’t been fixed, and they had just wasted their money on replacing a booster that wasn’t faulty. The only way to check is to be able to test the signal coming into the amp, and if the signal is good, then test the signal coming out of the amps output connections, if they are poor, then it points to the amp being faulty, if it is good, it tells you that the problem is further down the cable, and could be the cable itself.

When to throw away and start again

Digital TV Aerials are inherently flimsy and unless it is a very good quality make it, so if it has been damaged by the wind or has got water in it then there isn’t much to be done with it that will repair it. With these pieces of equipment it is best to invest in good quality and a professional aerial installation to begin with. If you are thinking of getting an aerial installation, but wasn’t sure whether to go for a loft aerial or one fitted externally to the chimney, see my recent post on the subject. When a good quality aerial and cable is used along with any other pieces of equipment, then the likely hood of the aerial system lasting a very long time are highly likely. It is worth the extra money to get it done right and to invest in this service since it will lead to trouble free viewing for many years to come.